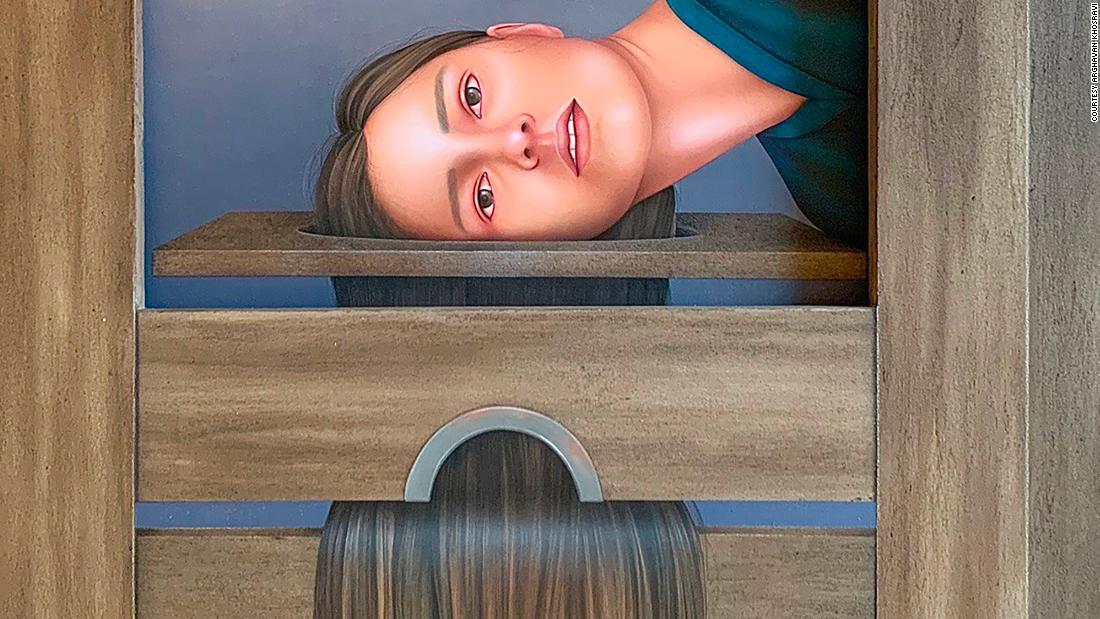 For Iranian artist Arghavan Khosravi, depicting hair in his paintings has been charged with emotion. She posted a video on Instagram in early October showing her sweeping the canvas with a brush to create fine threads. “These days when I’m coloring my hair, I’m full of rage and hope. More than ever,” she wrote in the caption.

She added the hashtag #MahsaAmini to the post, the name of the 22-year-old woman who died in September in the Iranian capital, Tehran, after being arrested by the country’s morality police for allegedly not wearing the hijab properly. Since then, Amini’s death has catalyzed protests across the country, many of which have seen young women and girls cutting their hair in defiance, and her name has become a rallying cry on social media social.

Khosravi grew up in a secular household in Tehran after the 1979 Iranian revolution, when a new theocratic regime instituted oppressive rules for women, including mandating the hijab, or headscarf, in public.

“I realized from a very young age that there’s this contrast between your private spaces, your home, and then your public spaces. At home you’re free to do whatever you want,” Khosravi said in a phone call from Stamford. , Connecticut. “Learn to navigate this dual life.”

Khosravi had her own run-in with the moral police in 2011 and was temporarily detained, she explained. Based in the United States since moving in 2015 to study painting, the former graphic designer uses long, flowing hair as a symbol in her metaphor-laden works. His surreal and dreamlike portraits of women, appearing on multi-paneled surfaces that resemble architectural facades, were influenced by the flattened perspectives and meticulous details of Persian miniature paintings.

Some of his latest works are currently on view at Rockefeller Center in New York City through mid-November, while his first solo museum exhibition recently ended at the Currier Museum in New Hampshire.

The women in Khosravi’s paintings are often depicted as bound by ropes or hidden behind walls, flowers or hands in what she describes as a struggle for autonomy. However, they have a dominant presence. Contrast ropes and shackles with expressions of freedom like doves. With exuberant colors and areas of radiance in which your subjects parts of the body seem to glow, Khosravi’s artwork is not dark, but luminous.

Khosravi is influenced by Persian miniature painting and her own memories of coming of age in Iran. Credit: Courtesy of the artist/Kavi Gupta Gallery

“Contrast and contradiction is one of the main concepts I’m exploring in my work,” she said, noting the dichotomies in the lives of many Iranian women. Red or black threads are a recurring motif in his paintings: they appear coiled around the fingers or wrists of his figures, sewn over their closed mouths or emerging from their eyes, sometimes as painted lines, sometimes as to physical strings hanging from the canvas.

“I was thinking about my memories of Iran,” he said. “There are many red lines imposed on us by the government.”

Contrast the symbols of oppression with those of freedom. Credit: Courtesy of the artist/Stems Gallery

Since protests broke out in September, Khosravi has seen hair become a powerful symbol how women cut theirs, in protest or in solidarity, and burned their hijabs in the streets.

“Women cutting their hair is an ancient Persian tradition…when fury is stronger than the power of the oppressor.” he tweeted Welsh writer and translator Shara Atashi at the end of September. “The moment we’ve been waiting for has arrived. Politics fueled by poetry.”

Reflections of the real world

In “Cover your hair!”, a painting that Khosravi recently re-shared on social media, a woman hangs from her torso by a long piece of red cloth, her long dark hair tightly wrapped in the material. Stylized Persian soldiers on horseback throw threads around their bodies in a poignant image of suppression.

Her previous work has foregrounded women with long flowing hair, works she has revisited on Instagram in light of Mahsa Amini’s death. Credit: Courtesy of the artist/Stems Gallery

“I have scenes from battlefields where soldiers are attacking women. And now, in the streets, we see videos of these security forces (and a) level of cruelty as they attack protesters,” he said. “I have some visual metaphors…but now they’re literally happening.”

But Khosravi hopes her subjects represent not just the experience of Iranian women, but any woman whose rights are under threat.

“Something in common among all (the women in my paintings) is that they are about the same age as me, or their hair color or features are, to some extent, similar to mine … because I’m thinking about my own story and other women who have been through the same,” she said. “But at the same time, I don’t want these figures to be too culturally specific. So anyone from any corner of the world can relate to his works based on their own experiences.”

“I’m thinking about my own story and other women who have gone through the same thing,” she said. Credit: Courtesy of the artist/Koenig Gallery

Now he’s sketching ideas for new paintings, responding to what he hopes will be a turning point in his home country.

“At some point I had lost hope that maybe things would change, but now there is this young energy, it’s very fascinating and I hope it will lead to a fundamental change,” he said.

While all the subjects in his portraits have some degree of agency, he is working on one new set of symbols that will evoke the strength of women taking on an entire government to claim autonomy over their bodies. “In light of everything that’s going on,” Khosravi said. “I want to give more power to numbers.”