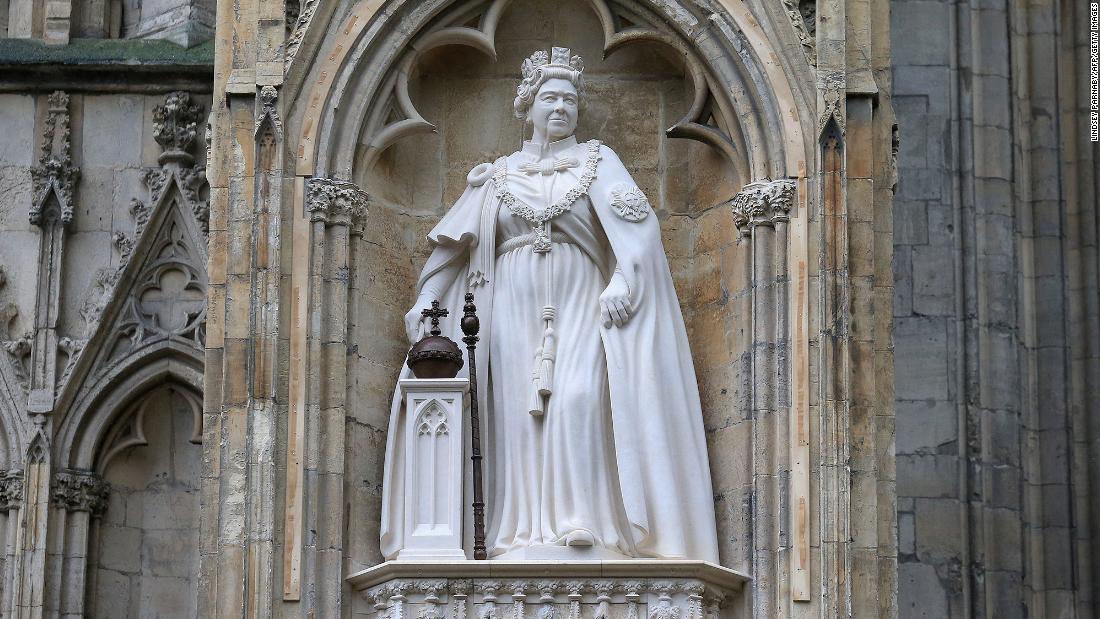 King Charles III has unveiled the first statue of his late mother Queen Elizabeth II since her death in September.

The new sculpture in the English city of York was unveiled on Wednesday at the gates of York Cathedral, Britain’s largest Gothic cathedral, and pays tribute to the late monarch’s life of service and dedication.

The king unveiled the statue in a rainy ceremony on Wednesday outside York Minster in York, England. Credit: Lindsey Parnaby/AFP/Getty Images

“When this statue was first planned five years ago, during a reign of unprecedented length and achievement, it was intended as a celebration of the late Queen’s platinum jubilee,” the king said in a speech at a ceremony in ‘rainy inauguration while holding a black umbrella. .

“Now, as we have witnessed, with great sadness, the passage of that reign, it is revealed in his memory, as a tribute to a life of extraordinary service and devotion”, he continued.

“The late Queen always looked out for the welfare of her people during her lifetime. Now, her image will watch over what will become Queen Elizabeth Square for centuries to come,” he added, before pulling down the purple cloth covering the towering statue. which overlooks York’s new public square from the top of one of the cathedral’s entrances.

Before the presentation, the Archbishop of York Stephen Cottrell described the “unique occasion” as an “immensely moving moment” in honor of “the long life and service of Her late Majesty Queen Elizabeth to her people, the his nation and the Commonwealth.”

The Queen died aged 96 on September 8, just months after celebrating an unprecedented seven decades on the throne.

His memorial statue, which was designed and carved by York Cathedral stonemason Richard Bossons, is just over six and a half feet tall and weighs around 4,000 pounds.

The king received a model of the sculpture, which was designed and carved by York Cathedral stonemason Richard Bossons. Credit: Danny Lawson/AFP/Getty Images

The French limestone sculpture shows the late queen in garter robes, crowned with George IV’s diadem of state and holding the orb and scepter, symbols of her role as head of church and state .

“It will stand proudly and resolutely in its niche, welcoming loyalists and visitors alike,” Bossons said in a statement.

Earlier on Wednesday, a 23-year-old man was arrested “on suspicion of a public order offence” after eggs were thrown at the king and queen consort during their visit to York, according to North Yorkshire Police.

Police arrested a protester after he appeared to throw eggs at the British monarch and the queen consort. Credit: Jacob King/PA Images/Getty Images

None of the eggs hit the royal family, who continued their engagement by meeting with members of the local community.

The man has been interviewed and released on police bail, the force said in an update on Thursday.

To get updates about the British royal family delivered to your inbox, sign up for CNN Royal News Bulletin.
Previous post ‘We desperately need money,’ climate envoy Kerry tells CNN amid criticism of his emissions credits plan
Next post Would Kari Lake accept a loss? Reporter who tracked his campaign responses