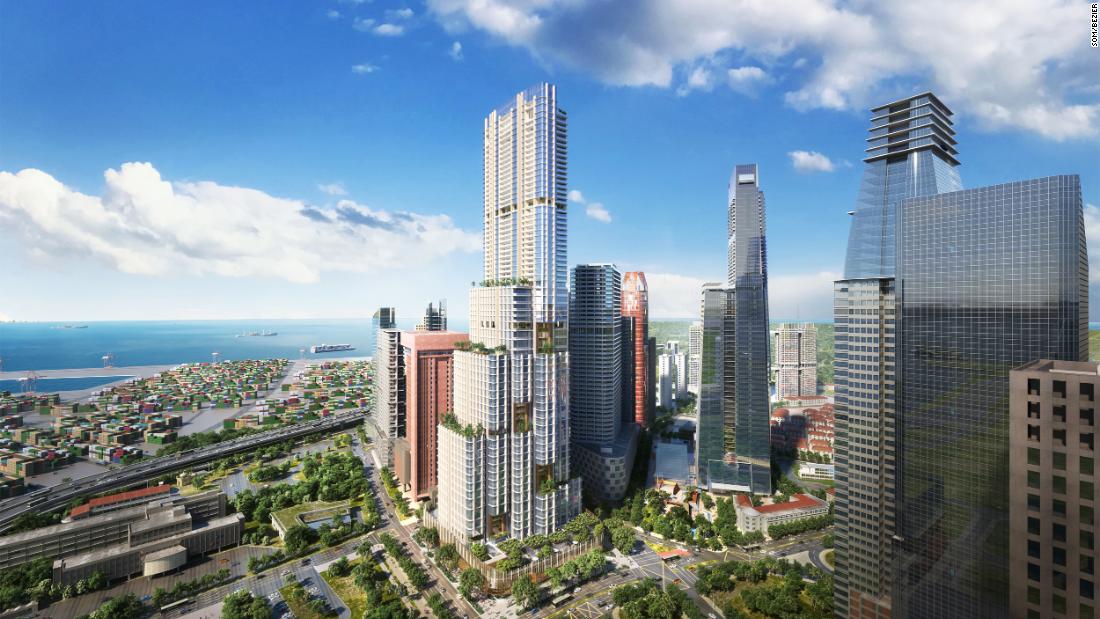 Singapore will be home to its first “supertall” skyscraper, a term used to describe buildings that exceed 300 meters (984 feet) in height.

The new tower, known as 8 Shenton Way, will rise above the Southeast Asian city-state from 2028, offering offices, a hotel and 34 floors of luxury residences.

Set on 1.6 million square feet of floor space, the skyscraper has been designed by Skidmore, Owings & Merrill (SOM), the American architects behind Dubai’s Burj Khalifa, the world’s tallest building.

A public square and shops will be provided on the ground floor. Credit: SOM/Bezier

Unveiling the plans on Thursday, the firm said its design was “inspired by bamboo forests”. Digital renderings show a series of cascading rectangular forms topped with rooftop terraces. The project will include more than 107,000 square feet of raised green space, with plants specifically chosen to attract birds and butterflies. More than half of the park’s garden areas will be accessible to the public.

“We want to create places that are comfortable, where people want to be and be healthy,” SOM design director Nic Medrano said at a press conference Thursday, adding that all occupants will be able to “access nature” inside of “three or four floors”. .”

The firm also said 8 Shenton Way will be one of Asia’s “most sustainable” skyscrapers. The 305-meter-tall (1,001-foot) tower, once operational, will use 55 percent less energy than is required to achieve the local government’s highest sustainability rating, the architects said.

A digital rendering imagines the building at night. Credit: SOM/Bezier

SOM design partner Mustafa Abadan said energy savings will be achieved through a combination of approaches, including a facade made of terracotta, reinforced bamboo and heat-efficient glass. Meanwhile, the horizontal and vertical fins that run along the outside of the tower will deflect sunlight, helping to keep the structure cool in Singapore’s tropical climate.

The tower will also be connected to the city’s district cooling system, an underground network of pipes that push chilled water to the buildings’ air conditioning units to reduce demand for electricity.

“This is the kind of thing that adds up to the most sustainable building of this scale in Singapore,” Abadan told CNN during a press conference.

The tower will contain office space, a hotel and luxury residences. Credit: SOM/Bezier

The skyscraper will be built on a site currently occupied by the AXA Cylindrical Tower, which opened in 1986. Demolition work has already begun, and the new building will reuse some of the existing foundation, a move that Medrano says would “save material”. . and reduce the building’s carbon footprint right from the start.”

Despite being one of the most densely populated countries in the world, Singapore’s skyline is relatively low compared to cities like Hong Kong, Shanghai and Shenzhen. Less than half the size of London, the country is home to two civilian airports and multiple military air bases, and there have been widespread reports of a building height restriction of 280 meters (919 ft) in areas of the downtown.

The Urban Redevelopment Authority of Singapore (URA) declined to comment on whether height restrictions are or have ever been imposed in the city. The town planning body did not explain why 8 Shenton Way was approved at its proposed size, although a spokesperson told CNN that “permitted building heights are subject to technical requirements as well as an assessment based on the respective site’s design and context.”

Related Video: A Brief History of the World’s Tallest Buildings

So far, the only other building to exceed 280 meters is the neighboring Guoco Tower, which was completed in 2018. Also designed by SOM, the skyscraper is 290 meters (951 feet) tall and contains a penthouse purchased by a British billionaire. businessman James Dyson for S$73.8 million (then S$54.2 million) in 2019.
In addition to the Burj Khalifa, SOM also designed two of the world’s 10 tallest buildings: the CTF Finance Center in Tianjin, China, and the One World Trade Center in New York. Their design for 8 Shenton Way was produced in collaboration with local Singaporean firm DCA Architects.
Previous post CNN’s David Chalian breaks down the exit polls on election night
Next post Go behind the scenes of Maricopa County’s ballot processing operation

CNN — At least three people were killed and 11 others wounded on Friday after a gunman opened fire on...

CNN — Ford has announced another SUV recall, this time affecting about 520,000 Ford Escapes and Bronco Sport in the...

new York CNN Business — Thanksgiving weekend has historically offered a cornucopia of movies, allowing moviegoers to get out of...