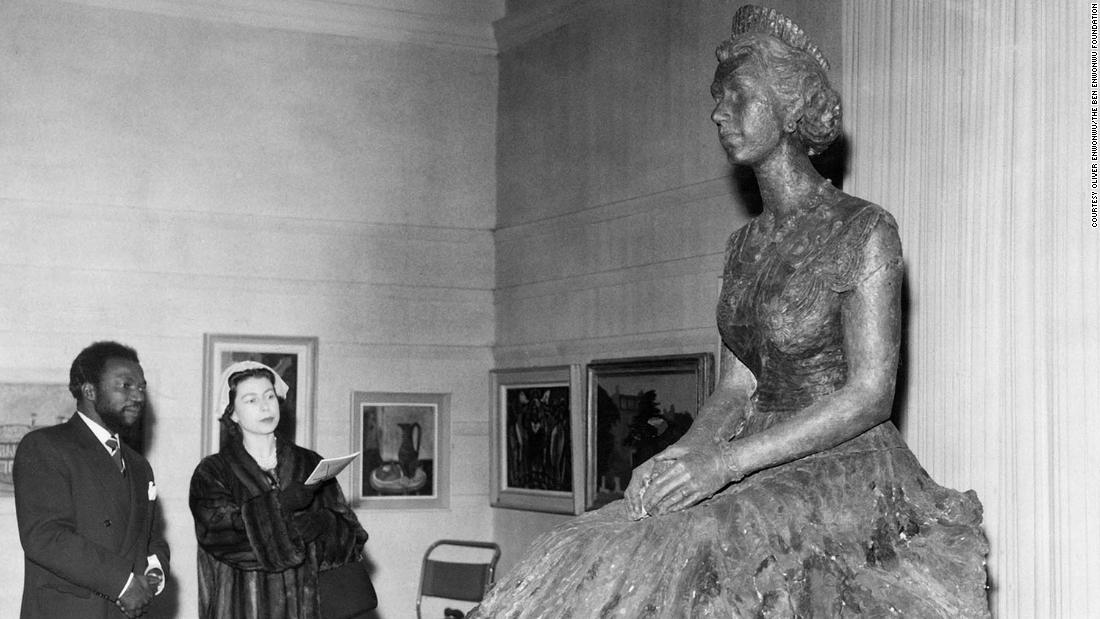 Kevin
It was 1956, and there was much fanfare and anticipation for Queen Elizabeth’s first visit to Nigeria.

The young monarch was only a few years into her reign and made a much-anticipated visit to the West African country, which had yet to become a republic.

Prior to his arrival, renowned Nigerian artist Ben Enwonwu received a royal commission to commemorate his visit with a statue, making him the first African artist to create an official portrait of a member of the royal family .

He began working on the sculpture the following year, visiting Buckingham Palace in London for several sessions.

In total, Queen Elizabeth sat for Enwonwu 12 times, eight of which were at Buckingham Palace, according to the Ben Enwonwu Foundation website.

The rest of the sessions took place in a private studio of Sir William Reid-Dick, Enwonwu’s colleague at the Royal Society of British Artists.

During this time, Enwonwu “finished a portrait bust and a sketch model of the sculpture,” according to the foundation.

Enwonwu completed the sculpture in 1957 and raised some eyebrows at the time to depict the queen with fuller lips. His son Oliver said it was part of Ben Enwonwu’s signature style to “Africanize” his subjects.

“Some of the rave reviews the sculpture received were that the artist depicted the queen through her African eyes, the work had African features, which was characteristic of his work,” Oliver Enwonwu told CNN .

Oliver, also a renowned artist, described the Queen’s sculpture as one of his father’s greatest works.

“My father was very proud of it. It was one of his masterpieces that showed his prowess as an artist,” he told CNN.

“At the time, this (Enwonwu making a sculpture of the queen) was very important because he was an African artist. But he was the most famous in the Commonwealth at the time, so it was very easy for him to be given the nod.”, Oliver added.

While the sculpture later ended up in Nigeria, Queen Elizabeth acquired the bust and, according to the Royal Collection Trust, had another sculpture by Enwonwu as well as some of his paintings.

The Queen’s bronze was later placed in the Nigerian Parliament building ahead of preparations for the country’s independence from Britain in 1960.

The work now resides in the Nigerian National Museum.

Enwonwu has come to be known as one of Africa’s greatest modernists.

Born in 1917, Enwonwu has been described as the most influential African artist of the 20th century.

He had become an eminent artist even before his royal commission, and in 1954 the Queen awarded him a Member of the Order of the British Empire (MBE) for services to art .

Enwonwu won a scholarship in 1944 from Shell West Africa and the British Council to study fine art in the UK after a successful solo exhibition. He received a classical education at the Slade School of Fine Art in London and attended Oxford University. Enwonwu later returned to Nigeria to become a teacher.

He was appointed Nigeria’s first professor of art by the University of Ife, now known as Obafemi Awolowo University, in 1971 and received a National Merit Award from the Nigerian government nine years later.

Previous post Video: How Serena Williams Became One of the All-Time Greats
Next post The video shows a bright object falling from the sky