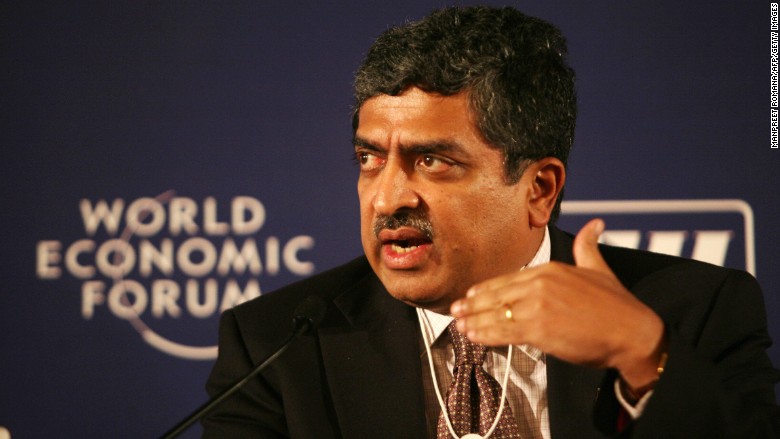 America is great for its willingness to accept talented immigrants.

Here’s what Nandan Nilekani, the billionaire co-founder of Infosys Technologies, would tell President Trump if given the chance.

“If you really want to keep America … globally competitive, you should be open to foreign talent,” Nilekani said on the sidelines of CNN’s Asia Business Forum in Bengaluru.

Infosys (INF) is India’s second largest outsourcing company and a major recipient of US H-1B visas. The documents allow the tech company to employ a large number of Indians in jobs in the United States.

The Trump administration is now considering significant changes to the visa program. Press Secretary Sean Spicer said in January that Trump would continue to talk about reforming the H-1B program, among others, as part of a larger push for immigration reform.

India is the main source of highly skilled labor for the US technology industry. According to US government data, 70% of the highly popular H-1B visas go to Indians.

Shares of several Indian technology companies, including Infosys, fell dramatically two weeks ago amid reports of an impending crackdown on work visas.

Nilekani said it would be a mistake for the administration to follow suit.

“Indian companies have done a lot to help American companies become more competitive, and I think that should continue,” Nilekani said. “If you look at Silicon Valley … most companies have an immigrant founder.”

India’s contribution to the industry, especially at the higher levels, has been immeasurable. The current CEOs of Google (GOOG) i Microsoft (MSFT)for example, both were born in India.

Related: India spooked by US plans to swap high-skilled visas

But Nilekani, who is also the architect of India’s ambitious biometric identification program, suggested India would ultimately benefit from any new restrictions put in place under Trump’s “America First” plan. If talented engineers cannot go to US, they will stay in India.

“This visa issue has always come up in the US every few years, especially during election season,” he said. “It has actually accelerated the development work [in India]because … people are investing more to get the job done here.”

Nilekani cited his own projects for the Indian government as an example.

The Bengaluru-born businessman left Infosys in 2009 to head India’s massive social security scheme, known as Aadhaar. As a result of the initiative, the vast majority of India’s 1.3 billion citizens now have a biometric identification number that allows them to receive government services, execute banking transactions and even make biometric payments.

“It was built by extremely talented and committed Indians,” Nilekani said. “Many of them had global experience, but they brought that talent and experience to solve India’s problems.”